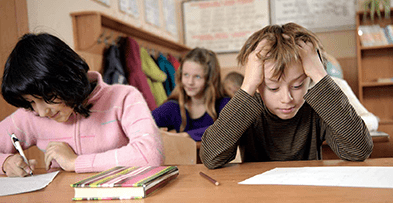 We are constantly hearing arguments from school boards and politicians on why student performance on tests should be an indicator of success and used to evaluate teachers.  The assumption is that if students are passing tests then they must be learning.  That’s a very dangerous assumption.

Just because a child passes a test doesn’t mean he or she has become a critical thinker, understands how processes work, is creative or able to conceptualize ideas.  It simply means they passed a test.  It assumes that if it looks good then it must be good.  In the end, we may very well be doing nothing more than using the proverbial esthetically appealing garment of good test scores to cover up the unsightly fact that our children are not excelling inside or outside the class.

If we’re not careful, the only problem teaching to the test will have solved is the desire to look as if we’re attacking the problem when we are instead ignoring the root causes.  It’s like someone who exhibits symptoms of being sick, never goes to see a doctor because they are afraid of what they might hear, the symptoms dissipate and the person assumes they must be okay.

Suggesting that improved test scores mean children are learning and significant progress is being made to change the academic trajectory of children and schools is no different from dressing up buildings in poor communities to be more appealing to the eye then labeling them condos.

Most of the schools targeted as failing or under-performing are in the inner city.  This approach of finding a quick fix or a way to cover up the problem rather than address the root of it is happening in these communities.

Neighborhoods deemed poor or ghettos are viewed as unsightly because the buildings are dilapidated, there’s litter on the streets, and the communities look unkempt.  The quick fix is to paint the buildings, pick up the trash and add nice landscaping to the grounds and change the name so that it’s no longer associated with negative stereotypes.

These things are nice and helpful on a very surface level but they do nothing to solve the problem of poverty.  We only end up with landscaped, esthetically appealing projects or ghetto. The same violence, substance abuse and crime still take place and poverty still exists. The only difference is that on the surface the community doesn’t look like it.

The same holds true for this over-emphasis on test scores as the primary indicator of a student’s ability to learn and a teacher’s ability to teach.  Scores may very well go up but in the end, test performance is not at the core of addressing a child’s ability to learn, conceptualize problems, think critically, and imagine greater possibilities for his or her future.

If not incorporated into a more holistic strategy that includes other tools students and teachers need to excel, good test scores will be nothing more than nice landscaping that does nothing to keep kids out of poverty and compete in a global economy.  Poor kids dressed in their nice school uniforms will continue to walk back home to their now-esthetically appealing ghettos but society will no longer have to look at this unsightly problem now covered up by better test scores.

Those who champion testing as the solution will feel good about themselves, thinking they have achieved their goal, when in the end the symptoms lay dormant but the cancer of our children not being prepared to compete in a competitive global job market will still exist.

Just as it is unrealistic to alter the veneer of a poor community then suggest that it is as safe a place to live as one that has never faces the same problems, it’s unrealistic to make test-driven accountability the standard for teachers and students while ignoring issues of equitable funding for schools, cutbacks in aid and class size.

We can’t expect schools that do not possess equal resources to produce equal results. Learning is multifaceted, complex and some of the issues impacting a child’s ability to succeed academically are beyond the teacher’s control and in some ways, beyond the child’s control, because they are rooted in broken families, poverty and unsafe communities.

Test scores should be a part of a larger solution that includes wraparound services, community involvement and sound policy that has the best interest of children in mind.  To get an accurate diagnoses of what ails our schools and the performance of teachers and students, we must consult with a variety of experts in their fields including teachers, parents, political leaders, scholars, students and other service providers.  Together we can come up with a treatment that addresses every aspect of the problem and enables children to thrive in a healthy environments inside and outside the classroom.